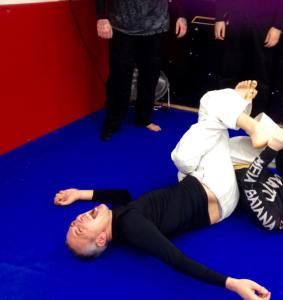 Sources can confirm that, after a  short hiatus “mostly dealing with family issues and some weird soreness in my armpits”, that blue belt called Rob that you met once at a seminar, has updated his blog.

The blog, which uses the standard WordPress format and is updated sporadically, has a brief and poorly worded summary of his training from a couple of nights ago at the Marlboro Red Academy in Rochdale, Arizona. The post also features pictures that are slightly too wide, as well as dead links on the right hand side that point to jiu jitsu websites that no longer exist.

This time I really am gonna keep this thing updated lol. It really helps me to get all the junk out of my brain and onto the page. LOL not junk of course i mean really interesting fact-nuggets about jiu jistu. shoutout to my sensei Dan.

According to the blog post, Rob has been working hard on armbars, drilling one at least 11 times (but only on the left side as he has a slightly sore hips.) He credits his sensei Dan for his armbar ability, and mentions at least three times that he hates being under side control. He also did pretty good in sparring the other night in case you were wondering.